It’s no secret that I am a horse lover. When I was thirteen my unsuspecting parents bought me my first horse after many years of relentless nagging (bad pun). I fell in love with the 17.1hh Standardbred named Oakie the moment I clapped eyes on him. It didn’t matter that he was huge and just off the pacing track and quite unsuitable for a novice rider like me – he was mine and that’s all that I cared about. And he was mine for 14 years and until he passed away. Years later I became a horse owner again and now have way more than is sensible. My husband and I seem to shamelessly collect horses out of pity for their plight or sometimes I have an “Oh my god he’s beautiful and I have to have him” whim. In any case, we own eight horses and each is special in his or her own way. If you go to my gallery page you can see a few photos.

Considering my passion for all things equine, I guess it’s no surprise that horses figure highly in most of my writing. In my January release for Harlequin Special Edition Made for Marriage, my heroine Callie is a horse riding instructor and former equestrian champion. I adored writing this character as I used all of my own love for horses and riding as she came to life. I have also written about heroes who are horse breakers and whisperers and heroines who are race horse trainers and usually manage a wrangle a horse into the story. If not, and because I love all animals, there’s bound to be a cat or a dog or even a goat 🙂

So thinking about horses always get me thinking about cowboys. To me there’s nothing sexier than a man on horseback, riding out and effortlessly cracking a whip overhead as he leads a herd of cattle home. Or a hero who can soothe a temperamental filly that doesn’t want to be broken with soft whispers and gentle hands.

Like this perfectly respectable cowboy on the right. I swear there’s a horse in the photo too!

There’s something intrinsically solid and strong about a cowboy. You just know and expect that he’s going to ooze integrity. He’s the man  who defends the woman he loves, the man who will fight if he has to, but who has enough confidence that he can also walk away from a brawl. He’s the man you want in your corner when things get tough. He doesn’t suffer fools or liars or cheats. He’s the man who makes you feel safe. He could be someone’s brother, or son or father and he cares deeply for his family. Or he could be a loner, a man hurt in the past who needs patience and kindness.  And he’s the man you want to fall in love with.

He also wears his clothes like they were designed for him. Worn demin that moulds over long legs and lean hips, twill and chambray that emphasises broad shoulders and a rangy swagger that just makes women swoon. Do women still swoon? 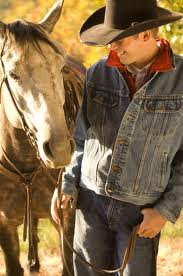 I think I got hooked on cowboys when I was a girl, watching westerns on TV on a Sunday afternoon. Of course the old time cowboys like John Wayne, Gary Cooper and Audy Murphy weren’t exactly sexy – but they did possess the qualities still associated with men of that breed today. They were reliable and honest and wore their code of honor like a badge. Sometimes they actually had a badge. The sheriff, the deputy, the lawman out to catch the bad guys. Those old time cowboys set the scene for their counterparts today. The gunfights are a thing of the past, but the character and strength associated with these often quiet and reliable men have remained.

Remember that old country song where the singer warned mothers to not let their babies grow up to be cowboys? I think that singer got it wrong. Cowboys rock. They are the backbone and essence of the Australian Outback and the American West. To me they are heroes on horseback and I hope I’m reading about them and writing about them for many years to come.

Do you have a favorite cowboy from a book or a movie? If so I’d love to hear about him.