A few years ago my husband was on a job and noticed a a photograph on the wall in this particular clients home. It was of a horse, full stride, chasing the finish line in a race. My husband got talking with the owner and was told the picture was of the horse he was currently training. The owner said he’d be looking for a a good home for the horse once his racing career was over and my husband said to keep us in mind (Not that we needed another horse, but this animal was special, as we discovered)

A year later the phone rang and it was the owner, telling us the horse was available. I was away at the time, on the Gold Coast at my writers meeting, and I got the call from my husband saying he was on his way to pick up our newest aquisition. Red Enzo. 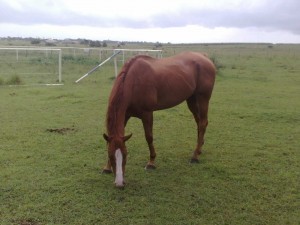 Who was once, we were told, the second fastest two year old in the country. Twelve hours and one round trip later, Red became part of our growing brood. He is, without a doubt, a stunning looking animal. A 17.3 hand chestnut gelding with a full white blaze. As soon as I saw his photo I knew I’d found my new dressage horse.

But he also suffers from navicular disease and his front hooves are mishapen like a ducks bill. He spent much of his racing career medicated with painkillers and injected with meds directly into the hoof prior to a race. He had numerous wins, came second as a two year old at Flemington (you know, where the Melbourne Cup is raced) and could have been a champion if not for his poor, hopeless feet. He had the heart for winning, just not the hooves.

So my plans for him to have a dressage career faded fast. He was to become a trail horse and used on short, gentle rides. I started riding him and he is a quiet, gentle giant. And he has a unique and quirky personality. He waits patiently for his feed every afternoon – and doesn’t get caught up in the running around, shouldering in for a spot near the fence when the feed buckets come out. He loves a scratch under the neck and adores a hose down on a hot day. He’s been a great honarary big brother to our yearling quarterthorse Calvin, and looks after the youngster in the paddock.

I often use my dogs and horses in my books, like in Made For Marriage, the heroine’s horse was actually based on a beautiful horse I owed in my teens, called Indiana. And I’ve already promised my readers that Red will find a home in one of my books very soon. So, stay tuned.

Next month I’m featuring another of my horses in Horse Tails . . . Jack! My husband’s twenty two year old quarterhorse who inadvertantly found his way on to uTube once.