When I was twelve I got my first horse. I’d been pony mad since I was five years old and at twelve, finally, my parents relented and said I could have my very own horse. I had to learn to ride before I could take charge of one though, and quickly got into the saddle for a few much needed riding lessons. My first horse arrived a couple of months later, a huge Standardbred called Oakey who I owned for fourteen years. We had a special relationship, and one I thought I would never have again. Until Zeb. 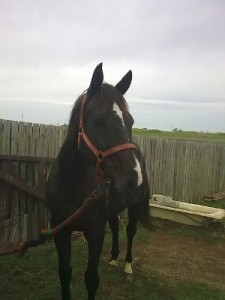 So, fast forward fifteen years since I had to say goodbye to Oakey. My husband and I had two horses, and my main saddle horse was my mare, Sharnah. But she was aged and small and I wanted a bigger mount. I wasn’t looking seriously and then one day my husband came home and said he’d seen a horse that I would just ‘love’. He’d spotted the big black gelding on the way home, in a paddock about twenty kilometers from where we lived. I laughed, because this was just some random horse he’d spotted – we didn’t know who owned him or if he was for sale. But my husband insisted we take a drive past, and did so that weekend. Of course, I fell in love with the horse immediately. He was huge, close to 18hh (which is BIG) He was fully rugged, hood and all, so I couldn’t get much of a look at him, but he came up to the fence and I had a pat. After that I would visit him every week for a couple of minutes, hoping to catch a glimpse of his owners, but it never happened. I’d take him a bit of hay and he’d always come to greet me. One day, about four months later, my husband came home and told me the horse was gone. Silly, but I was sad for weeks. it seemed I had to forget all about the big black and look elsewhere.

We did get another horse a couple of months later – a Standardbred mare that we adopted from a fate where so many ex racehorses go. But she was not for me – too spirited, too intense. She quickly became my husband’s horse. And the search for my new mount started again. About a year later we answered an advertisment and went to have a look at an ex-racehorse, who happened to be agisted in the same pasture where the big black once was. As we arrived a car pulled up and a woman and teenage girl got out. My husband explained we were there to look at the horse that was for sale – they seemed to know the owner and chatted about the horse for a few minutes. The horse for sale was not for me, I discovered, as it hadn’t been ridden in over two years. When I said I was looking for a big, quiet horse I could trust, the woman look at me, smiled, and said – “Oh, you want something like Zeb.” She pointed to a cluster of trees and I turned around to look. And there he was – my big black. He was back. He’d been away at a riding school, she explained, and was ‘sort of’ for sale. Inside I was jumping up and down, and I couldn’t help thinking how I once again felt like that twelve year old girl who’d wanted a pony so badly.

They didn’t really want to sell him, as the teenage girl had become attached. However, I knew I had to have this horse. We actually had to go to their house for an interview, which was funny, and I talked all about my first horse and how much I now wanted Zeb. That was four years ago. Zeb is now a permanent part of my life. My trusted mate who makes me remember what it is about horses that I love. It was fate, I guess. If I hadn’t gone to that paddock to see the other horse I would never had met Zeb’s then owner. Timing, in so many ways in our lives, can be everything.